This past year was… Awesome! Here’s what I’ve been up to! 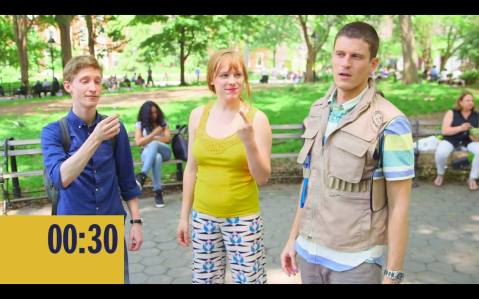 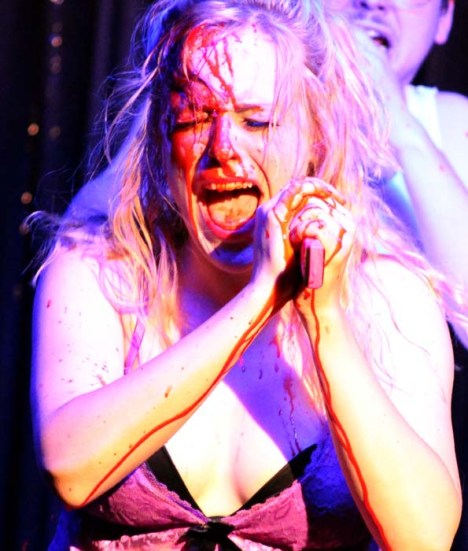 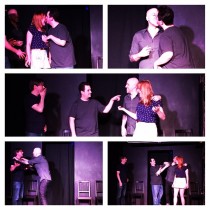 Dog Fight at the Annoyance! 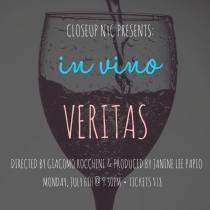 “In Vino, Veritas” premiered at the Metropolitan Room. July 6, 2015 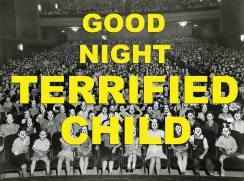 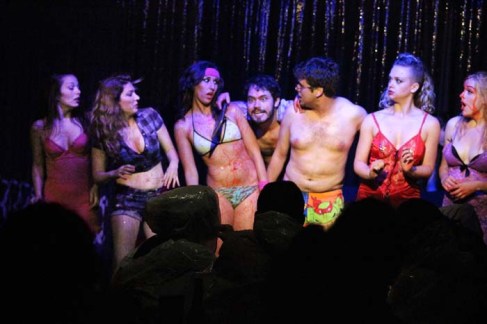 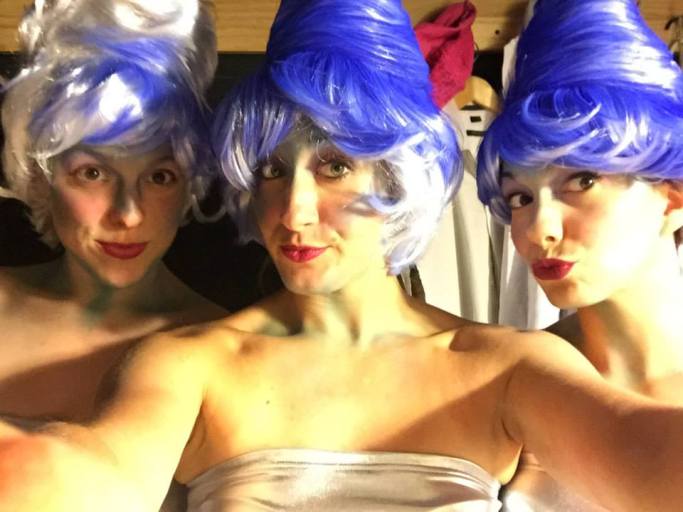 This Sunday, “Good Night Terrified Child” will debut at the Annoyance as part of the “Triple Feature Show” and return to the Striker Stage at the PIT as part of Sketchfest.

This time we have 20 minutes to perform some of our best work from our last re-working of the show. Some of the cast’s favorite characters were kept and new diabolical twists were added…

We were under the direction of Adam Cole for this incarnation of “GNTF”.   And in a playful and inventive style, we used improv to build and re-work characters and sketches.

I love improvising through scenes, and sketch, it keeps the work fresh.  As a performer you are kept on your toes. The dialogue, can’t be uncomfortable, or wordy, because you are making it up. Unless, you are a generally wordy and uncomfortable person. You must remain in the moment, because your partner may alter thier lines and you must respond truthfully, as to that character’s truth.

My cast is, as per usual, stellar. And I can’t wait to kick off this weekend of insanity and love with all terrified children. 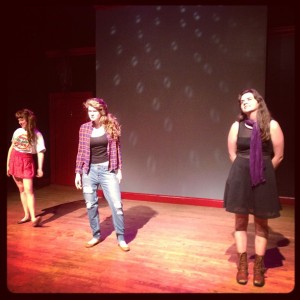 Great News! I was recently cast in the Annoyance’s new Thursday house team.We are called Manowar! (Like the heavy metal band…and the poisonous jelly fish.)

On a personal note: ( I LOVE THIS NAME) because, it was my nickname for swim team way back when.

Our improv team, Manowar will perform on a rotating schedule with the other Thursday night improv teams, Salt and Gun Club.

It should be great. So far our practices have been going along… Swimmingly. And funn-ily (sp?

See us, Manowar Every week 8pm at the Annoyance Theater in Brooklyn!

Its seems as if the city changes during the fourth of July weekend. Many of the improv theaters close. The street are no longer flooded by ties, suits or sensible heels. True-red blooded Americans flood the beaches and stay out of Manhattan. The exiles left, are people, like I and my friends. Also there is huge group of tourists that don’t speak English and some giant human-size rats. Us exiles, are made to make theater. So we did! 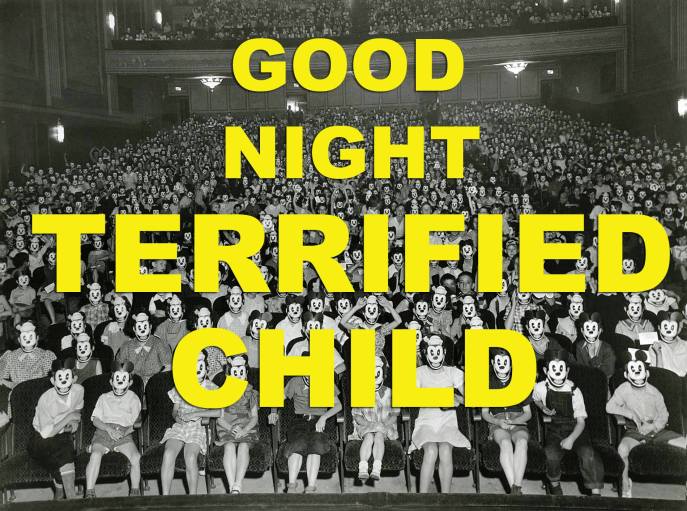 “Good Night Terrified Child” a sketch show premiered July 3, 2015 on The Striker Stage at the PIT

A Sketch show. Dark and Dreamy, like your first crush.

A macabre review. You can see me in :Zero Gravity Girl by the Alien Surfer Babes, Savage Hot Babe Massacre a play by Steve Strangio and The Zombie Jamboree

“In Vino, Veritas” premiered at the Metropolitan Room. July 6, 2015

A intimate theater experience, where each actor tells their story to a table of 5.

It was a lovely, busy theater filled weekend!

Sunday, April 19th. The cast and I had our final performance of “Blended Zeppelin” at The Annoyance. The show featured Led Zeppelin lyrics. Every line we said where things sang in the band’s songs.

It had an odd poetic feel about it. Almost like Shakespeare, in rhythm, but with modern vernacular.

“Blended Zeppelin” at the Annoyance. April 2015

Tonight, I was lucky enough to perform with Glory Haim Improv in “Dog Fight” at the Annoyance Theater in Brooklyn.

We competed against other improv teams, for best of the night. But the thing is, the winner is picked by a dog. And would you believe it… We won! The dog picked us!

Earlier this week, I performed with Princess Massacre Improv, with a ballot judged by the audience… and we weren’t as successful. We lost.

I thought both performances were successful, however that’s the fickle nature of improv comedy. Ya win some and you lose some.

Last Wednesday, I received an envelope from SAG-AFTRA. It contained some great news! During work on “Between Bedford”,  I became eligible to join SAG-AFTRA. How cool is that?

SAG is a the Screen Actor’s Guild. It is a union of film performers. It’s another step closer to professional status!

Last week “Under a Deadly Spell” premiered on the Lifetime Movie Network. This Episode of “I Killed my BFF” is about a group of Goth teens.

“I Killed my BFF”

Tonight, Tuesday November 11. One of my teams, Mutual Slayer, is performing at the Queen’s Secret Improv Club, in Long Island City! 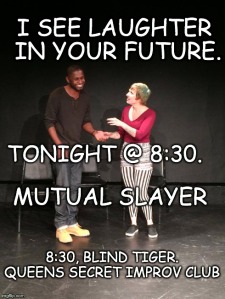 A poster for our show tonight!

We are part of a show called “Blind Tiger”. We are teams that are students of the Annoyance theater, an improv school that teaches classes in Brooklyn!

Friday, November 14th, as part of the “Fear Corner” at the Tank, Princess Massacre is performing. We are taking on our greatest fears, our fears are emotional vulnerability! We will be playing emotionally grounded scenes. 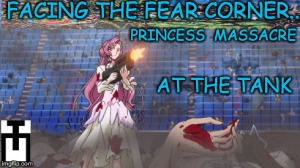 So much has happened last month, I’ve not had the chance to “blog” about it. (Can we take a moment to remember a time when “to blog” wasn’t a verb?!)

I was back on set with “I Killed my BFF”, playing a troubled goth teen. It felt like home to work with the crew again. They are so cool. I often find myself in awe with how worldly and unique people the people I meet on set are.

Since I played such a “dark” character, I also dyed my hair… BLACK! It was a radical transition. It is fading to a dark brown as of late, and I am trying to figure out if it is a change worth keeping.

Since, my hair is now dark, I got new headshots! (It was about time, I was dragging my feet on the whole thing.)

An unrelated note on October: I finished my AP 3 class at the Annoyance in Brooklyn.  Class is very supportive and gives me  tools to use when I perform or audition.

My improv team, Mutual Slayer, can be seen, some Tuesdays at the Queen’s Secret Improv Club until December 16th.

Mutual Slayer is part of a show, called “Blind Tiger” which features students of the Annoyance Theater in Brooklyn and Chicago. We do a form called Screw Puppies, in which someone “edits” the scenes with a black out. More on that later.

shannonleighmann
Create a free website or blog at WordPress.com.